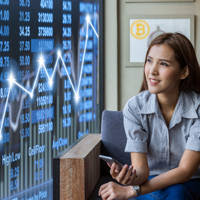 Bitcoin price to hit $400,000, analyst who predicted cryptocurrency’s rise warns: BITCOIN’S price is set to surge into the hundreds and thousands, the analyst who predicted the cryptocurrency’s meteoric rise has claimed.
Independent research analyst Ronnie Moas predicted over the summer that the value in Bitcoin would reach as high as $5,000 (£3,738) when the digital currency was trading at just $2,600 (£1,943).
Since then, Bitcoin has surged to $20,000 (£13,582) in value as of Monday, according to prices tracked on Coinbase.

Read also: End of Bitcoin? EU plans identity CRACKDOWN which will store the identities of ALL users
He told CNBC: “Bitcoin is already up 500 percent since I recommended it in the beginning of July, and I’m looking for another 500 percent move from here.
“The end-game on bitcoin is that it will hit $300,000 to $400,000 in my opinion, and it will be the most valuable currency in the world.”
His claims are based on the idea that since only 21million Bitcoin can ever exist, increasing demand for the digital currency will naturally drive its price up, he said.
Mr Moas said: “I don’t know how much gold there is in the ground, but I know how much bitcoin there is, and in two years there will be 300 million people in the world trying to get their hands on a few million bitcoin.
“This mind-blogging supply and demand imbalance is what is going to drive the higher price.”
Mr Moas said he believes his price target is a conservative call, but a recent survey of 53 economists carried out by the Wall Street Journal found that 51 considered Bitcoin’s price unsustainable.
Another study by Anglia Ruskin University, Trinity College Dublin and Dublin City University released on Friday said Bitcoin could pose a threat to the financial stability of traditional currencies and markets.
Larisa Yarovaya, one of the report’s authors and a lecturer at Anglia Ruskin University, said:
“Our evidence finds that the price of Bitcoin has been artificially inflated by speculative investment, putting it in a bubble.
“Although bitcoin is not regulated by governments, it could still have a knock-on effect on traditional markets due to the interconnectedness of cryptocurrency markets with other financial assets.”
SOURCE: EXPRESS.CO.UK
Facebook Comments